HCG drops reduce hunger and cravings, but hunger can still occur.
What can you do about it?

As in any weight loss plan, HUNGER is the most common barrier to success. HCG dieters will eventually stop the diet just to make these feelings go away. People very commonly aren’t able to properly distinguish between real hunger and cravings or other emotional feelings. Identifying and preventing real and perceived hunger leads to easy weight loss.

Check Sheet for Hunger in the HCG Diet: What to Do

What to Eat If You are Actually Hungry?

More About Causes of Hunger in the HCG Diet:

Why are 100 million overweight Americans having such difficulty losing weight? The answer is that we are always hungry (or at least we think we are). The search for food is one of our strongest drives; it is deeply ingrained in us and is necessary for our survival. But we have reached a stage of development in our societies where we are constantly exposed to high-calorie, easily obtainable, pleasing and inexpensive food. All of this food overwhelms our control mechanisms and we just cannot stop eating.

Hunger is a normal reaction to the absence of food in our system; it is our body’s way of signaling to us that we need to eat. People who have succeed in their weight loss programs understand that it’s possible to control feelings of hunger by understanding the factors that stimulate it. Hunger management is as important to losing and keeping off weight as pain management is to modern surgery.

In order to successfully manage hunger we must first learn to recognize the difference between hunger and cravings. The “growling” of our stomach, often accompanied by fatigue, weakness and thoughts of food, is hunger. Cravings are simply a very powerful, irrational need for specific types of foods. Cravings occur even when we are not hungry or after we have just finished a large meal. Hunger is a necessary physical need while cravings are emotional desires. 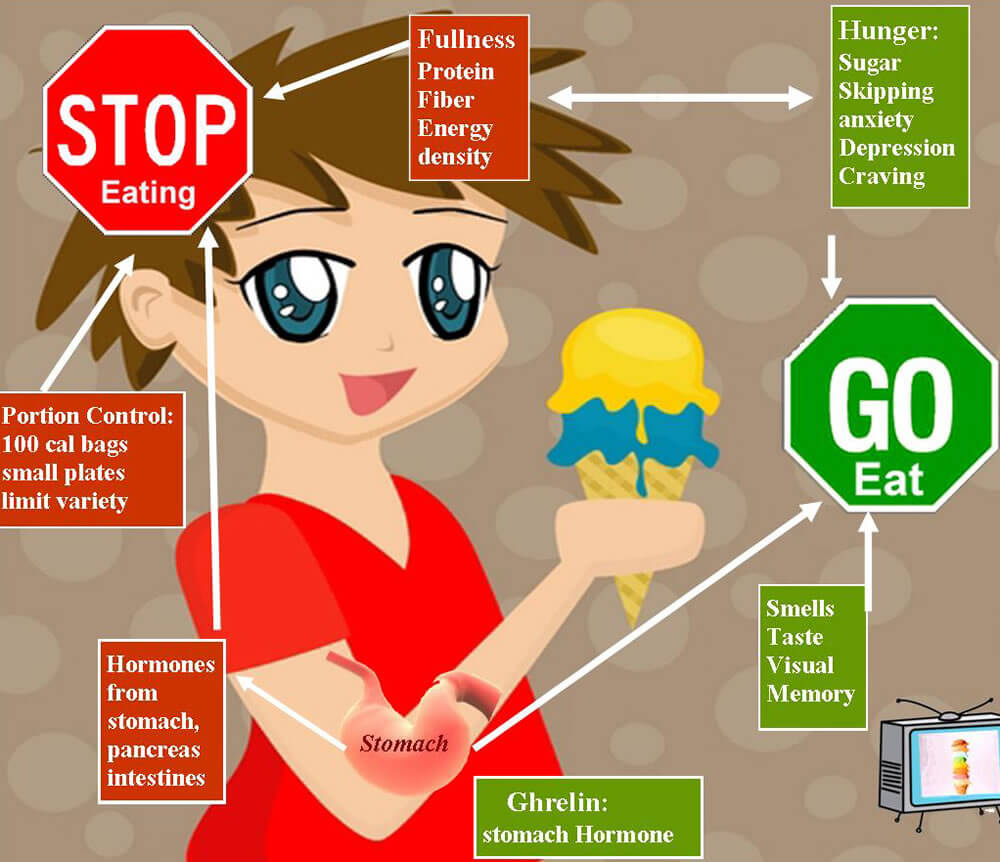 HCG Reduces Hunger from Internal Chemicals That Tell Us to Eat

Many obese individuals are unable to lose weight because of hormonal imbalances in their brains and blood. They never feel full because they either lack certain hormones or have too much of them. Often the brain’s appetite center fails to recognize the signals for how often we eat and how much we eat the way it should. These are some of the reasons that certain very overweight people cannot lose weight and disproves the statement that willpower must play a role in dieting.

The master hormone in charge of our eating is Leptin (from the Greek word leptos, meaning thin), which is produced by fat cells. Leptin tells our brain how much fat we have stored in our body. When our brain senses that there is too little Leptin, it will react with hunger and signal us to eat until it believes we have had enough to produce and store more fat cells. Then the brain sends messages to stop eating. This process might be compromised in obese and even overweight people. Instead of avoiding overeating it will now induce overeating. HCG reduces these messages and chemical signals to eat.

Hunger is About the Foods We Eat

The foods we eat stretch our stomachs, releasing chemicals into the bloodstream that travel to the brain and trigger feelings of fullness by shutting off the hunger messages. Some foods are better than others at doing this job. Foods high in protein and fiber seem to produce feelings of fullness for hours. Usually 4 grams of fiber per portion, or 10-15 grams of protein cause fullness.

Carbs, whether in sugar form or foods that quickly turn into sugar in the stomach, do not provide much feelings of fullness and cause hunger. Foods with 10 grams of sugar or more per portion almost always stimulate hunger while those with 2 or 3 grams of sugar do not. One of the reasons for success in the HCG diet is the absence of carbs.

Foods also directly affect our brain cells, resulting in the release of endorphins, which make us feel full. People who do not respond to these stimuli cannot stop eating. 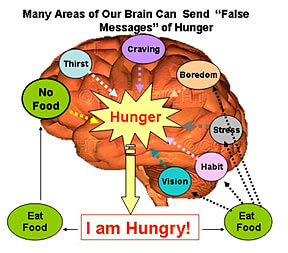 Hunger is caused not only by chemicals acting on the brain or the foods we eat, it is also a result of many external signals. Recent research indicates that overweight individuals may eat in response to stress, thirst, time of day, fatigue, habits, what they see on television, and even what they smell. Understanding how external signals can produce hunger (or what is misinterpreted as hunger) is very important. Overweight people seem to overreact to these stimuli.

Simply recall the 1940s and 50s to see the effects of external signals on eating patterns. Back then, people did not have the difficulty with weight control that they do now. Fast food was virtually nonexistent and food portions were smaller. The rapid increase in obesity in the last 40 or 50 years is not a result of any new “imbalance in hormones” but is a consequence of the effect of more prevalent external signals triggering our desire to eat. Misinterpreting these inappropriate signals as hunger results in rapid weight gain.

Undoubtedly for some overweight individuals, their weight problems are the result of abnormalities with hormones controlling the appetite centers in their brains. For others, overeating is a result of powerful external signals. However, for most obese individuals, a combination of both hormonal and external signals results in overeating. This is why willpower is ineffective and most diet plans fail! Anybody attempting to lose weight must first learn to protect themselves from signals and cues that imply hunger even when they are not hungry.

The most important step to controlling your hunger and cravings is to learn to tell the difference between true hunger (being hungry is normal) and the numerous emotions we all have that we confuse as hunger. Once we understand this basic concept, making changes is much easier. The central element in the Law of Attractions has to do with focus. Thinking about being hungry only creates more feelings of hunger. Focusing on finding alternative foods that satisfy hunger shifts the mindset away from destructive to more constructive thinking and, therefore, more positive actions.

If you feel hungry all the time, your brain is definitely misinterpreting the signals and cues for real hunger. The real feeling of hunger does not occur all the day but only in times when the body is in real need of food. The following is a list of some of the non chemical cues causing hunger that you can try to minimize:

It is important to know whether what we experience as “hunger” really is hunger. Eating triggered by external cues, whether stress, visual triggers or fatigue, will not satisfy those hunger feelings. Often, 20–30 minutes later, we are eating again. Very few overweight individuals experience hunger because of abnormalities with hormones that control the appetite centers in their brains. For most, their hunger results from powerful external signals.

Use the following table to help you determine whether what you are feeling is genuine or imagined hunger.

The following table provides a quick guide to hunger-satisfying foods: