With all the different questions about the HCG diet, probably the most common is: Should women continue taking HCG drops throughout their menstrual cycle? HCG drops are becoming a more and more popular form of HCG, so this issue arises much more often than before.

The initial HCG diet protocol invented by Dr. ATW Simeons involved taking daily injections instead of utilizing HCG drops with their easy oral administration. Dr. Simeons advises in his book “Pounds and Inches: A New Approach to Obesity” that women should stop taking HCG during their period. Contrary to what some people claim, Dr. Simeons never offered a reason for this recommendation. However, he did say that women generally had no problems with hunger even without HCG during their period. If they tried to go without HCG after their period was over, they would often start feeling ravenously hungry until they got their dose.

Weight loss generally slows down throughout your menstrual cycle

This is brought on by normal water retention, which usually increases during this period. Don’t stress, and don’t get dejected. Above all, don’t cheat, as this will certainly lead to a true plateau and/or a weight gain. Although women tend to lose a little less weight than men overall on the HCG diet, it’s completely normal. Your extra water weight will come off quickly as soon as your period is over. 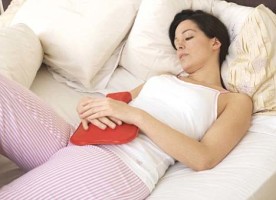 It was Dr Simeons’ opinion that the HCG should be stopped completely during menstruation. As indicated he never explained the reason. I have searched the medical literature to find a possible reason and can not find anything that would justify the need to stop the HCG.

Many women have experimented with taking HCG drops during their menstrual cycle. Most of the evidence that I have seen indicates that there is no difference whether HCG is taken during menstruation or stopped. Certainly, weight loss slows down if you stop the HCG. It is clear, that if women are losing weight quickly often they will skip a period or even have two periods in the month. The is due to the rapid weight loss, not the HCG. If you’re worried about it, just follow the original protocol. Either way, you should still lose a lot of weight very fast, and you’ll be grateful you tried HCG

Here is what Dr Simeons wrote about HCG and Menstruation

Menstruation:
“During menstruation no injections are given, but the diet is continued and causes no hardship; yet as soon as the menstruation is over, the patients become extremely hungry unless the injections are resumed at once. It is very impressive to see the suffering of a woman who has continued her diet for a day or two beyond the end of the period without coming for her injection and then to hear the next day that all hunger ceased within a few hours after the injection and to see her once again content, florid and cheerful. While on the question of menstruation it must he added that in teen aged girls the period may in some rare cases be delayed and exceptionally stop altogether. If then later this is artificially induced some weight may be regained.”

Starting treatment:
“In menstruating women, the best time to start treatment is immediately after a period. Treatment may also be started later, but it is advisable to have at least ten days in hand before the onset of the next period. Similarly, the end of a course of HCG should never be made to coincide with menstruation. If things should happen to work out that way, it is better to give the last injection three days before the expected date of the menses so that a normal diet can he resumed at onset. Alternatively, at least three injections should be given after the period, followed by the usual three days of dieting. This rule need not be observed in such patients who have reached their normal weight before the end of treatment and are already on a higher caloric diet.”

Menstrual interruption for weight loss:
“The fourth type of interruption is the one which often occurs a few days before and during the menstrual period and in some women at the time of ovulation. It must also be mentioned that when a woman becomes pregnant during treatment – and this is by no means uncommon – she at once ceases to lose weight. An unexplained arrest of reduction has on several occasions raised our suspicion before the first period was missed. If in such cases, menstruation is delayed, we stop injecting and do a precipitation test five days later. No pregnancy test should be carried out earlier than five days after the last injection, as otherwise the HCG may give a false positive result. Oral contraceptives may be used during treatment.” 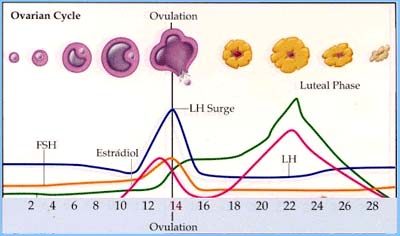 As discussed earlier, I find little evidence for all of this complicated starting and stopping of the HCG treatment. My best advice is to continue treatment through the menstrual cycle. Minor weight gain may occur during early menstruation due to water retention, however this is very transitory. Researchers have actually found a 10% to 15% increase in metabolism during early menstruation.

Previous
Next
Best Buy HCG
555
I was a big snacker during the evening. I would come home, have dinner at 6 PM and then eat until midnight. I could consume as many calories from 6 to midnight as during the day. My cravings were... more »