Drinking water and zero calorie, zero sugar diet sodas or any other beverage with no sugar and no calories has been one of my favorite recommendations. However, often the message gets mixed up in the controversy about the safety of artificial sweeteners and the “healthy” factors in fresh juices, smoothies and juicing.

Comparison of High and Low Calorie Beverages Over a Day 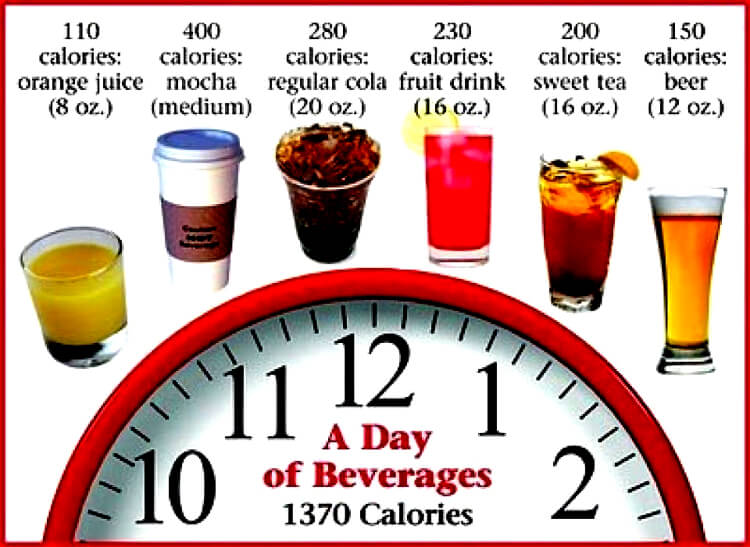 Here are the calorie counts for when picking low calorie and low carb beverages. The light beer was reduced to 8 oz. The differences are huge: 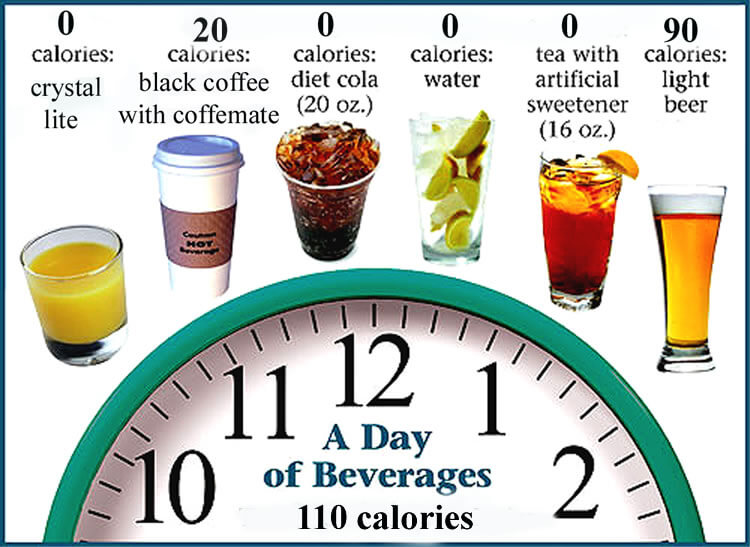 An extensive 6 month study on the effects of zero calorie beverages in weight loss was reported in the Jargan Post on July 28, 2012

“London: Replacing calorie-laden beverages with water or diet soft drinks can help people lose 4 to 5 pounds, health experts say. In a new study, University of North Carolina at Chapel Hill researchers compared weight loss for 318 overweight or obese people, who were divided into three groups: those who switched from calorie-laden beverages to diet soft drinks; those who switched to water; and those who were not counseled to change beverages but received general information about healthy choices that could lead to weight loss.”

“Substituting noncaloric beverages – whether it’s water, diet soft drinks or something else – can be a clear and simple change for people who want to lose or maintain weight,” said study author Deborah Tate, Ph.D., associate professor of nutrition and of health behavior at the UNC Gillings School of Global Public Health and member of the Lineberger Comprehensive Cancer Center.

Tate and colleagues undertook the study to provide scientific evidence of whether eliminating calories from beverages is an effective weight loss tool that health-care providers and nutritional counselors could recommend. All three groups experienced small reductions in weight and waist circumference during the 6-month study.

However, people who switched to calorie-free beverages were twice as likely to lose 5 percent or more of their body weight than those who were not counseled to change beverages. People in the group who drank mostly water had lower fasting glucose levels and better hydration levels than the control group. “Substituting specific foods or beverages that provide a substantial portion of daily calories may be a useful strategy for modest weight loss or weight gain prevention,” Tate said.

This is an ideal study because it shows that tiny changes even in beverages can have very significant effects on body weight and even metabolic parameters. Its very simple to substitute a high calorie, high sugar beverage for one of the hundreds of zero calorie substitutes. Note in the study, no mention was made about drinking 5 or 10 bottles of water a day. Just a simple change. It should be that all groups making the change experience both weight loss and reduction in belly fat. What is most important is that the dieter does not go ahead and eat some high calorie food because she has reduced her beverage calories. 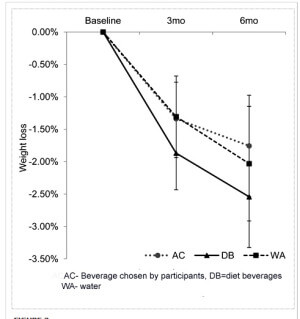 This intervention required minimal self-monitoring (only beverages) and included monthly treatment visits with recommendations to change one aspect of dietary behavior and produced a 2–2.5% weight loss. The importance of caloric beverages as a target for calorie reduction is noteworthy because they are typically consumed at least daily, whereas food intake types may vary. This approach is more consistent with others recommending small but potentially sustainable changes as a technique for long term weight loss and weight control.

The original protocol of Dr Simeon’s in the HCG diet did not mention diet beverages because it was written 20 years before the beverages were invented. I find no reason that dieter can not drink them, so go ahead. Lose the weight and finally get off the weight loss plateau.

Previous
Next
Best Buy HCG
555
I was a big snacker during the evening. I would come home, have dinner at 6 PM and then eat until midnight. I could consume as many calories from 6 to midnight as during the day. My cravings were... more »